the secretary of defense donald rumsfield got his righteous ass handed to him on capital hill yesterday.

and if you missed it, you’re not alone.

matt drudge, blogger and towel boy to the right took the day off to get his kneepads restuffed apparently because if you go to his blog today all you see is a headline saying “More Photos, Videos Coming” linking a 6 1/2 paragraph breif of the 3-hour drubbing the senate armed services committee delivered onto the architect of americas last two “wars.”

but drudge isnt the only one to ignore what some reporters called the most fascinating testimony they’d heard in 20+ years of covering american politics.

instapundit called in sick but his blog ads to the new republic and “say no to daschle’s gang” kept on blinking. although this morning he did have enough strength to get a jab in on michael moore.

the new republic’s blog “a daily journal of politics” didnt even blog yesterday… for some reason. maybe they have a new definition of daily.

sgt. stryker‘s only post was a link to timmers weekend caption contest which is a picture of sen. kerry shaking a young boy’s hand.

josh marshall completely missed the boat by becoming distracted by joe leiberman’s opening buffonary, but he did remind us about a long peice of fluff the defense secretary did for the washington post on 1/29/01 where he wrote, “In the execution of presidential decisions work to be true to his views, in fact and tone. If you foul up, tell the president and correct it fast. Delay only compounds mistakes.”

and since it metafilter is so paranoid about turning into newsfilter they completely ignored it. cuz theyre too damn cool for news.

this was a day where in the morning the new york times ed board said simply “Donald Rumsfeld Should Go” that afternoon the Washington Post’s editoral board wrote a little bit called “An Inadequate Response,” and the day before the Economists cover story was titled Resign, Rumsfeld.

are you all on the fucking take?

say it aint so glenn.

the blogosphere is in very deep shit when the fucking busblog has to deliver the goods on whats happening in washington dc. ive got teenagers to date.

instalinker really must be sick because today he sends us to donald sensing cuz his boy said rumsfeld did a good job yesterday. 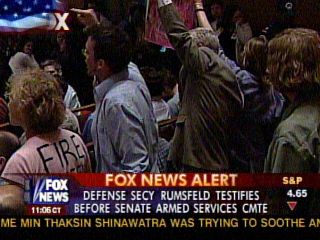 the secretary of defense had information in january that us military personel were abusing iraqi prisoners of war in a way that most americans deem vile, outrageous, and unamerican. only after the pictures came out did rumsfeld say anything. before that he didnt tell the president, didnt tell the congress, and didnt tell america.

he sat on it as someone who was responsible for it would sit on it.

the best summary of the asswhipping Rummy & Co. got could be best encapsulated during an exchange near the end of the proceedings surrounding the curious moment when Gen. Richard B. Myers, Chairman, Joint Chiefs of Staff discussed finding out that 60 Minutes was going to do a story on it and asking them to delay the broadcast.

MEYERS: I called CBS to ask them to delay the pictures showing on CBS’s “60 Minutes” because I thought it would result in direct harm…

Sen. Mark Dayton (D-Minn.): Mr. Secretary, is that standard procedure for the military command of this country to try to suppress a news report at the highest level?

MYERS: It didn’t — let me just — Senator Dayton, this is a serious allegation…

MYERS: … and it’s absolutely — the context of your question, I believe, is wrong.

DAYTON: I understand the context, General, you…

DAYTON: … told us the context earlier. I have very limited time, sir.

MYERS: I want to take as much time as we need to straighten this out.

This report — the report was already out there, the news was out there about the abuse…

DAYTON: General, if the news had been out there and we had all known about it…

Sen. John W. Warner (R-Va). (Chairman): Senator, I ask that the witness be allowed to respond to your question. They’re very important questions.

General, would you proceed?

This was not to suppress anything. What I asked CBS News to do was to delay the release of the pictures, given the current situation in Iraq, which was as bad as it had been since major combat ended, because I thought it bring direct harm to our troops; it would kill our troops.

We talked about it, and I said, “I know this report will eventually come out. But this — if you can delay it for some period of time — it would be helpful.”

DAYTON: What period of time is that?

MYERS: I did it based on talking to General Abizaid and his worry was like mine, and he convinced me that this was the right thing to do. There was no — this report has been around since January. What was new were the pictures. I asked for the pictures to be delayed.

DAYTON: Did you discuss delaying — calling CBS to ask them to delay their report, with the secretary of defense, or the vice president or the president?

MYERS: Of course not.

DAYTON: None of those.

MYERS: Of course not.

DAYTON: I would just say, General — and I agree with your assessment of the consequences of this on our troops, and that’s the great tragedy of this, but attempts to suppress news reports, to withhold the truth from Congress and from the American people is antithetical to democracy.

MYERS: You bet it is. And that’s not what we were doing.

DAYTON: And whatever the intentions may be, sir, the result is always the same. And it’s, I think, terribly tragic that the president, who wants to expand democracy around the world, by actions of his own administration is undermining that democracy in the United States.

DAYTON: That’s always the result when people try to control information, delay it, manage it and suppress it, it has that result. It’s antithetical to a democracy.

RUMSFELD: May I speak a minute, Mr. Senator?

Throughout the history of this country, there have been instances where military situations have existed that have led government to talk to members of the media and make an editorial request of them that they delay for some period disclosing some piece of information. It is not against our history. It is not against our principles. It is not suppression of the news. And it’s a misunderstanding of the situation to say it is. 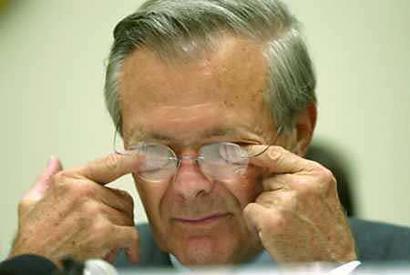 That is antithetical to democracy and the Constitution, which has the Senate and the House as co-equal responsibility for this country.

I want to just ask about the escalation of American forces, sir. You’re bringing in, in response to all of this — and this is also important. This is the future of this nation and the people who are over there.

You’re increasing the number of forces, the number of tanks over there. How can this have anything to do but to escalate the level of violence, the opposition of Iraqis, intensify the hatred across the Arab world to the United States, and more atrocities? How can this have any result other than to put us deeper into this situation and make the conditions there worse for our forces and for our nation and for the world?

which was only topped by this earlier salvo between Republican Lindsey Graham (R – S.C.), and the unfortunate general.

GRAHAM: At that time, is it fair to say you knew there was a story about to come out that was going to create a real problem for us?

MYERS: At that time, what my concern was was the impact it could have on our forces in Iraq. That was my focus at the time, was, “OK, if these photos are revealed right now, given the intensity of operations, what could be that impact on our troops?”

And my conclusion was this would be the worst of all possible times for these to come forward, realizing that eventually they’re going to come forward; I understand that.

GRAHAM: Did you feel the need to inform the Congress or the president or the secretary of defense about the potential damage this could do?

MYERS: We had discussed the potential damage back in January, and in February and in March. And as we marched through those events on that chart, a lot of those events were based on our concern with where this might lead. In other words, is there a…

WARNER: We just need to — could you use the microphone, General, we’re missing some of your…

GRAHAM: Long story short, I do trust the people in uniform to get it right. And I want to take the time necessary to make sure the people responsible are brought to justice and anybody innocently accused has their day in court.

Here’s the problem: It doesn’t take a rocket scientist to figure out the explosive nature of these photos apart from court-martial, apart from legal proceedings. And most of us here found out about it on television. And if we knew enough to say, “Don’t air a show that’s going to be bad,” why did we not call the president, call senior members of Congress to prepare us for what we were eventually going to see? That’s the essence of my concern about all this.