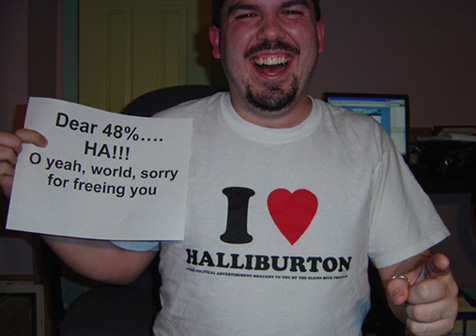 looking at one of those huge blue handicapped signs and i saw him feel the braile and i realized that maybe thats why they have braile instructions on atms and other places.

cuz not everyone is totally blind. some people, it turns out are just sorta blind.

he wanted to know where a certain hospital was and i said things like youre north of sunset now and you want to go a block south of sunset. it was pretty neat.

normally i like to help people who look lost. i will approach them before they come up to me.

the other day i saw these two girls who were obvious tourists and they were in the total wrong part of town. and i said are you two lost. and the one says ask her. so i asked the other one and she said nah.

plus there was this other punk rock dude going down the stairs.

problem in hollywood is you never know if youre being punk’d by punks.

and i’ll tell you what, when a guy sees the light at the end of the tunnel, aint no stopping him.

cuz like i was telling that blind guy, if youre in need of a hospital, just go a block south of sunset.

the hospitals in knoxville must be harder to get to because the instapundit is still under the impression that dan rather should be fired for reporting incorrect information and the president of the united states shouldnt.

the instapundit is so obsessed with rathergate, as he calls it, that he has four fresh links to it today.

“Will Rather — or Sixty Minutes producer Mary Mapes — be fired?” glenn asks on his msnbc column today.

short answer: not for this

longer answer: rather will resign when bush does.