she didnt know the place was a topless tapas establishment either, but we both took off our shirts and cozied up to the bar.

i was there with two dozen of my closest friends to see rock group tsar.

there being spain, not the topless tapas place.

mar’a asked me if i was americano

she asked me if i liked my tapas

she asked me if i liked her cunt-

she asked me what other words i knew.

she said, we dont have those things here.

so we simply slowdanced to the spanish guitars and i sang her a little song that i made up there on the spot.

she doesnt know
how much i weigh in pounds
she doesnt care
that im 108, 108 years oooooold
oooooh my spanish girl.

and the lines began to form outside the dunkin’ donuts across the pallazo.

she said, i know how much pounds you weigh.

i said, what about the metric system.

and i tilted my head to the exito

and she said si.

and we left into the madrid night forgetting our shirts

and not giving a muchas gracias. 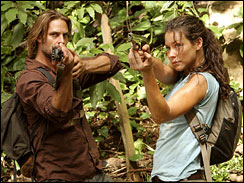 millions and millions of people watched Lost last night, so for those of you who didnt, write me a nice email about how badly you want me, or if youre a dude, write your momma about how much you love her. cuz the spoilers are about to flow like rhymes from ice cube.

so to me, what made last nights episode, the two-hour finale so wonderful was the return of the man who was in the hatch when locke found it, desmond, and his amazing backstory.

in fact, last night made me believe that my favorite show isnt a story about Jack or Locke or even my beloved fat man Hurly, but that this is the story of desmond

who is being tested, and monitored, and fucked with, and who has the best love story.

i hate that my Black brother is such a villan and so unbelievably driven to sell out everything that he believes in for a son that he barely knows. i dont buy it. nor do i like it.

i love the crazy four-toed statue remain which immediately made me think that this is the island of buggs bunny. evil buggs. the one where everyone runs down into holes and hides and then pops up to hunt other wabbits.

i love that the preacher was right and that desmond even knows that you shouldnt fuck with spiritual men. and im glad that he who was wrong admitted it. sincerly.

im happy about who didnt die in this episode, paritucularily because i had heard rumblings about this fellow or that one dying and when it looked like someone was going to get blowed up or on fire, something even more spectacular happened other than mere death.

although now i wonder if they can push the button ever again.

will locke fix it? will the iraqi dude help him?

and what about the boat? why would you sail that thing to where the others are? dont you think they’ll just steal it?

i love that hurley is so unwanted. i love that jack and the hot babe are so uncomfortable about their getting caught in the net. and of course i love poisoned darts, but who doesnt love that shit.

my friends at work speculate that Walt’s dog will have some sort of significance to the plot, and if Lost wants to hire me for a few weeks, i know i could write a pretty funny backstory episode where we learn about his dark past.

$40k if i can have access to the hot tub and laundry facilities.

however, theres nothing better than three gay guys on stage on national tv