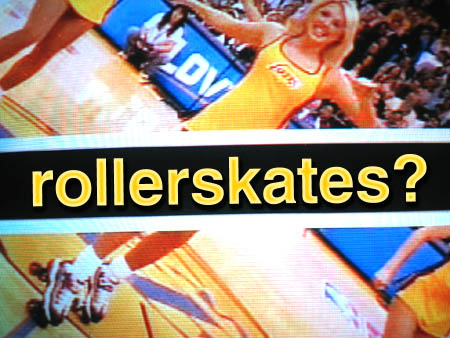 is it really okay to let them rollerskate all over the playoff floor at the staples center?

got motivated and cleaned the pad pretty well today. sometimes that will happen to me on a sunday. good thing, too, because karisa has two friends in from out of town and they might stop by after eating at pf changs and drinking at the rainbow.

the xbi had an independent company come in on friday and talk to some of us.

one of the questions was what do you like most about your job.

i said lack of paperwork.

i just show up, strap on the helmet, and aim at the criminal element.

the interviewer said that she found that suprising because she was told that i was a writer and she would have thought that i would like doing reports and projects but i told her it wasnt true. i had done projects and written things for work in the past, at other jobs, and most of the people who read them didnt understand or like them, which can be disappointing when you put your heart into something.

the survey asked about vacation days, and sick days, and personal days, and the food in the break room, and health benefits, and spending plans, and i told them that none of that shit interested me.

i told them that i liked to work and when companies put the right people in the right jobs you dont have to spend so much time and money in all that bullshit, but the problem is companies put people who arent great in positions and then get stubborn about moving them into the right places once they get to know them.

you can have a perfectly good guy working in one cubicle for one department, but he’s not so great at that job. and you can have another guy in a cubicle right next to the first guy, and that guy isnt doing so good at his job either.

and in any other galaxy they would just swap the two and see if it works, and odds are it would work, but on this planet there are reviews, and write ups, and people making stuff up, and feelings getting hurt, and talking behind peoples backs and all this crapola, and then there needs to be resumes printed, and interviews and meetings.

its exhausting just to think about.

me and my last girlfriend would work out our problems naked on a sunday night like tonight in our bed of love and still sometimes we couldnt work everything out.

and thats two people who truly love each other.

the interviewer asked me what my point was.

i told her that when you are doing things right, and you have the right person in the right place, they dont need a bunch of sick days, they just need a boss who is cool when the person tells them that hes sick.

i said i know.

she said, do you think youre right for the xbi?

i said, ask chopper one.