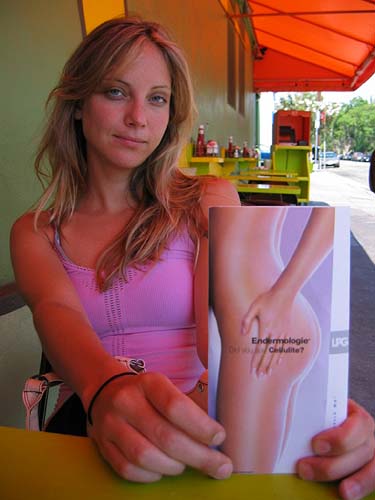 people get jealous and freaky. if ashley and i were still best of friends she would have been sure to have said a few choice words about the pics, and because danielle and i are still chummy she not only called me today to point out that i have new pics of karisa

she asked me to dinner tomorrow night at our favorite place, thaitown’s best, palms thai.

i told her that i couldnt sup with her because i and doing that with my exes chris and jeanine, but i could luncheon with her if she drove up from diego as soon as she got her pretty head off her pillow.

she wasnt sure until i told her that i would give her the full photo shoot treatment. she said deal and promised to call me in the morn. i forgot to tell her to bring a few outfits for the vault but hopefully shes reading this, in which case, hey bring some outfits so i will have some stock pics for the future.

awesome. so people wanted to know what the purpose of karisa and i having lunch the other day was all aabout and it was to celebrate her first modeling job. it was for this laser removal brochure which she is holding up in the photograph. as you can see she was upset because all they wanted to use her for was her hip ass and leg. she said it made her feel like an objectified bodypart and was disappointed that they didnt use any pictures of her whole bod including her face and hair which she told me they spent hours babe-ing up.

i was all kid welcome to hollywood.

she was all, do you think they thought i was fugly?

then i said, jk baby, youre a hot chick and everyone knows it and even though this is lalaland not every model gets her sweet face on the cover of mademoiselle, you posed for the cam, they took the pics, and they chose the part of you that would best sell their service. instead of being pissed you should tipout the photoshopper.

and she nearly threw her five dollar cup of soup at me and said, no photoshop was used thank you very much!

and i was all bullshit

i was all, whoevers right pays for this lunch.

and she stood up and pulled down her puma jogging pants

and not only did i have to pay for our lunch but the joke was on her cuz i was gonna pay for that shit anyways sucka!

and tomorrow and this weekend you will see some hot pics of danielle who is a super cute yet quite competitve gal and with her pics you will also get to hear part two of our convo which isnt, i swear, about uteran operations, its far sexier and funnier and easier on the ears.

cubs lost today and dusty had the rookie throw 120 pitches and when he ends up in the DL in a few years you cant say its cuz he tossed too many curveballs, it will be because dusty baker is the most overrated manager in baseball and is a pitcher-killer.