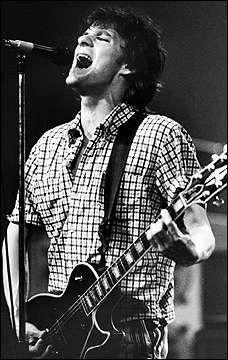 Can’t Hardly Wait: Paul Westerberg is going to do a series of instore record store gigs to help promote his first new solo record in years. including a show on 4/25 at Ameoba Records on Sunset here in LA. Somehow Billboard got a sweet exclusive interview with the former Replacements frontman.

I once had an exclusive interview with the former Replacements front man. We were backstage at Rob Gym, The Replacements had just completely dominated all over the place and there were maybe 6-7 of us back there and the band was sitting around looking at each other, it was totally a “so now what” moment, and i wanted to juggle or something to keep them entertained, but fortunately there were a few girls backstage. So I took off my backstage pass and got my pen and handed it to Paul and said, could you sign this for me, and he took the pen and he wrote, “No, Paul.”

I’ve got tons more stories about the Replacements but it’s 2am and I really should get to sleep.

OK, one more, there aren’t that many poems of mine that I have committed to memory, maybe three or four. When I got to college I was happy to see that most poets dont memorize their stuff, they leave that for their fans.

Once my first love came to visit me at my beach side home in Isla Vista and she came with her husband, I think, and I was really looking forward to taking them out for a nice breakfast. But after our night of drinking, they left early in the morning and I felt a little sad, so I wrote this little poem, and it was the first poem that I ever got published and I named it after my favorite rocker at the time. it was during my it-aint-a-poem-unless-it’s-sad phase, so watchit.

and the mess is mine to clean

unseen blood down miles of forearms

slimy goo all red and green.

but im the brown thats in the middle

im the brown that no one owns,

and no one hears his moans.

a nightmare in my eyes

my guts got stuck in quicksand

and you all think it’s lies.

and the sunset’s grey

and everyday i wake up and walk around

and need a nametag

in my dirty own hometown.