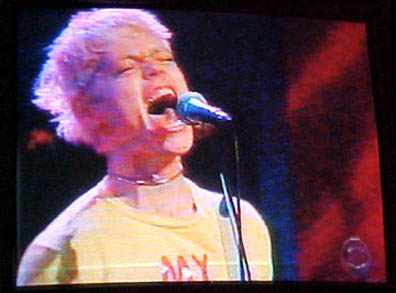 Tsar (pictured) will combat the hype that is Eve 6 tonight!

A rock star’s life on the road is one big to-do list: Bring guitar, leave girlfriend at home, wear pants.

Can Max Collins be expected to remember everything?

Officers there arrested the lead singer of Los Angeles-based rock outfit Eve 6 early Tuesday after receiving a complaint from a local hotel of “a male…in the lobby without his pants on,” Lt. Michael Hoover of the Moon Township, Pennsylvania, Police Department said.

The hotel was the Crowne Plaza in Coraopolis, Pennsylvania, located just outside the Pittsburgh International Airport. The pantsless male was Max Collins, at least according to “a number of witnesses.”

“Was I naked? Or does everyone else just have clothes on?,” Collins asked, tongue presumably in cheek, in a statement released Thursday.

To be sure, it was clothed people who ratted out the rocker. They told police Collins was parading around the lobby, sans pants, and riding the elevator, sans pants.

Even cops concede, however, that rocker was not entirely naked.

“He did have shaving cream on his genitalia,” Hoover said Thursday.

Still, there is a reason why humans wear Dockers, and not thick, foamy lathers, in polite company.

Despite Collins alleged efforts to cover up with shaving cream, it was “clearly evident,” as Hoover put it, that beneath the Barbasol lay the frontman’s instrument.

It was not known if Barbasol was Collins’ brand of choice. We just hope to God it wasn’t one of those clear gel formulas.

Whatever his favorite label, Collins apparently didn’t pack enough. According to reports, shortly before police were called, Collins appeared at the front desk (sans pants–natch) and asked if he could trouble the hotel for some shaving cream (double natch). An employee then escorted the unclad rocker back to the elevator, and implored the young man to clad himself. Collins allegedly didn’t heed the advice, with the near-naked lobby parading and elevator riding commencing.

By the time police arrived on scene, the show was over. Collins was found in his room, still sans pants, Hoover said.

Police did ask Collins exactly why he was sans pants, but “he had no reason for his behavior,” Hoover said.

Was it maybe, well, hot in Pittsburgh that night?

(Just trying to be helpful.)

He and bandmates were in Pittsburgh for X-Fest, an alternative rock bash held Memorial Day at Post-Gazette Pavilion. Eve 6 played during the day, with Collins’ arrest occurring after midnight, several hours later.

“We were bored and in the middle of nowhere,” Collins said in the statement. “This is what happens when you play an afternoon show and are stuck in a hotel in Moon Township, PA.”

Collins was booked on suspicion of indecent exposure, Hoover said. MTV.com reported Collins’ brief stint behind bars ended Tuesday when he posted bail at the Allegheny County Jail. A preliminary hearing is scheduled for Tuesday.

RCA Records spokeswoman Maggie Wang said it wasn’t believed Collins’ close shave in Pittsburgh would sabotage Eve 6’s summer plans, which include a club tour starting in mid-June, and the release of the band’s third album, It’s All in Your Head, due out July 22.

“We view it as a minor incident,” Wang said of the arrest.

Eve 6, which charted in 2000 with the hit “Here’s to the Night,” is scheduled to shoot a music video next month in Los Angeles. The band’s first single from the new album: “Think Twice.”

Always good advice when about to parade around in a hotel lobby, sans pants.