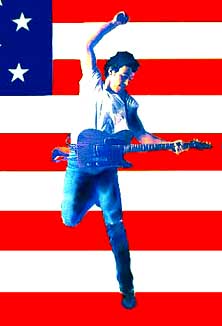 now i don’t even know where it is.

i may have sold it, lost it, torn it, stored it or stained it.

and the reason frightens me.

one of the classic cliches in rock conversations is “i like his old stuff better.”

in a way it says that the artist has lost his mojo, but in another way it identifies the critic as either being 1) stuck in the past 2) unable to flow with change or 3) a lazy snob.

i plead guilty to all of the above, but that doesn’t mean that the boss hasn’t hit the wall.

tell me one album that he put out since born in the usa that isn’t full of shit.

but human touch, lucky town, the ghost of tom joad and the rising are far from fulfilling the prophesy of bruce springsteen being the future of rock and roll.

for if they are the future, rock is dead.

since hindsight is 20/20 one could say that the boss probably stopped wanting to be the future of rock n roll about 20 years ago when he released the river, a double album whose best moments were its dark creepy violent and regretful tales of woe captured perfectly in the title track.

springsteen hit critical and artistic homers later with the all-acoustic nebraska and born in the usa, but take two critical songs off of each record, and you have what he has now: hum drum dreck from the jersey boy who we thought would be bob dylan and the rolling stones all wrapped up in one. 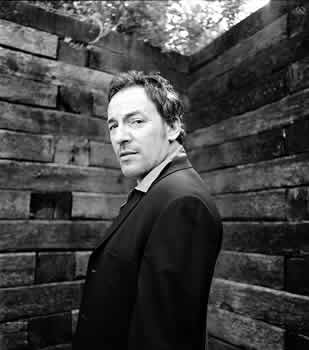 take two songs off of any of his first six records and you still have solid albums.

my fear is that age hit springsteen and wiped out his young man’s desire for fast cars fast women and fast times and no longer was he interested in idealistic notions of being born to run, but more concerned with being a family man and a good citizen – both noble goals, for bankers, and bartenders, but i thought he made a deal with us, to never retreat, to never surrender.

springsteen was 35 when born in the usa, his last good album came out.

bob dylan was 34 when he came out with his last great album, blood on the tracks. when he was 35 he seemed incredibly confused with ’76s “desire” and the downright failure of ’78s “street legal”.

from the time springsteen was 37-46 he’s given us tunnel of love, lucky town, human touch, and the ghost of tom joad.

i cant even think of four great songs from that era, and it worries me because it doesn’t look like there’s any sign of a comeback.

but there rarely is.

when neil young turned 35, he too freaked out.

when he was 34 he came out with the classic Rust Never Sleeps and Live Rust, only to follow with 8 really bad records in a row, 5 of whom were with the totally unlucky Geffen who had no idea that they were financing a ten-year creative slump. 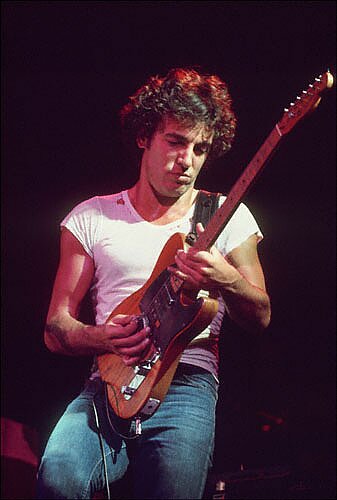 but when neil turned 44 he released a mighty one-two punch of a comeback with ’89 “freedom” and ’90 “ragged glory.” which was then followed up with the gnarly wild live records of “arc” and “weld” proving you could still Rock well into your 40s.

and not only Rock, but inspire the kids, like sonic youth and nirvana.

sonic youth would end up opening for young in the mid 90s.

now its understandable that not everyone wants to be smashing guitars and fronting the likes of crazy horse while in their 40s and 50s.

tom petty has definitely taken off what little edge he had in his younger days.

when he was 34 he released his most creatively diverse lp “southern accents” which featured the sitar-flavored “don’t come around here no more.” two years later he would rock for the last time with “let me up (ive had enough.)”

and even though he mellowed, as on his first solo record “full moon fever” (’89) tunes like free fallin and i wont back down didn’t completely suck despite turning 40.

if anything that record was a precursor for the subtlety that we would enjoy in his next three cds “learning to fly” “wild flowers” and the best of the bunch “Songs and Music From ‘She’s the One’“.

bruce released a live version of waits’ jersey girl as the b-side of the born in the usa single “cover me.” both good songs. the year was 1985, both men were 36 (waits is just two months older than springsteen).

springsteen had just released his most successful record, and waits was about to do the same with the 1985 classic “rain dogs.”

where the boss had peaked at 35, waits was just beginning, starring in the ’86 jarmush film “down by law”, and in ’87 busted with the bad ass “franks wild years” (a musical play he wrote with his wife). 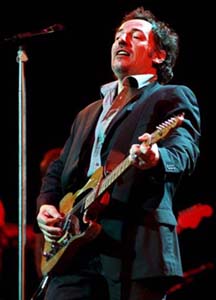 in the 90s when springsteen was still floundering, waits came out with bone machine, the black rider, and mule variations. those first two right there: totally amazing.

what tom waits and neil young and bob dylan did was continue to experiment.

petty just aged gracely, but the boss didn’t seem to know what exactly to do, or what it was that he wanted to do.

he seemed too afraid to make the embarrassing mistakes that neil young was unconscious about, and therefore hopeless to deliver forgettable middle of the road mush that is so fat and satiated that even dramatic topics like aids (“streets of philadelphia”) and the attacks on 9/11 (“the rising”) sound more like mumbles than thunders.

which is why i wont be at dodger stadium tonight, reliving past memories with a fallen idol.

instead i’ll be seeing a band who tonight will be calling themselves steve garveys moustache.

at a secret location.

before they grow up and turn 35.