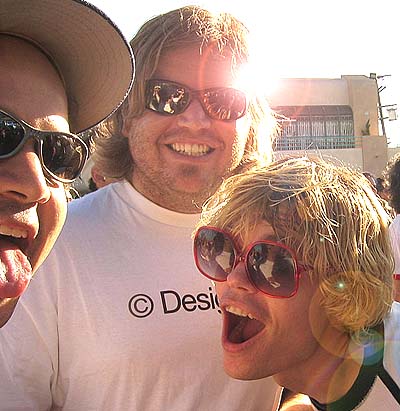 i took your advice and walked the four blocks to the sunset junction street fair and music festival.

if theres one person who understands my love of home it’s you, and i appreciate that.

because im lazy i took the bus three blocks and it turned down hyperion and dropped me off and it was sunny and glorious and warm at the beginning of sunset junction, and i was glad i had decided on the long hawaiian shorts.

as you suggested i took a buttload of pictures. my batteries die quickly and mc brown says that it might be my camera cuz he says he can take pics all day with his one battery and there i was with two and one died after just about an hour.

the kids were beautiful. i think you would have liked them. everyone was out. the hipsters, the gay boys, the lesbians, the mexican punker kids, black skaters, little kids, dogs.

and everyone had tattoos.

i saw this girl that was covered in them, gorgeous girl. my heart hopes that she’s a stripper but i don’t go to any strip clubs so what’s the use. she had a great skirt on too. i tried to take a picture but how do you do it and not be like a pervert.

i need a camera in my sunglasses.

people would understand if i had a camera in my sunglasses.

i walked down the midway about halfway and saw someone selling chicken on a stick for three bucks and i had to. it wasn’t bad.

im not sure how you feel about chicken, but when grilling it, especially outside, and esssspecially in little bites on a kabob stick, theres no reason that they have to be over cooked. people are so freaked out about undercooking chicken but its so easy to tell how you’ve done, just wait till its white.

it never hurts to see a little pink in there. 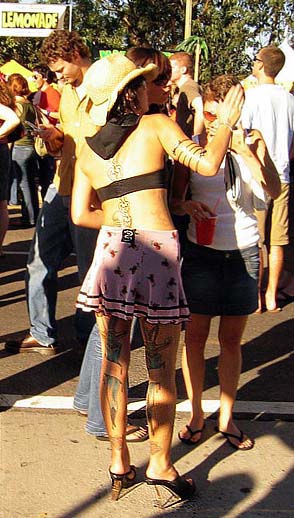 and if its just a little pink you know you’re almost there.

the muffs played. for a little while in frisco i listened to blonder and blonder every day.

it was nice to see her again and her band played hard.

her guitar amp blew up after the first song and she was pretty punk rock about it. bitched a little tiny bit and turned her back on the crowd as they rolled on a spare. and then rocked us.

instead of being a courtney she has aged into something softer and sweeter. still quite beautiful. still loves to yell. still a far better songwriter than kurts wife, who i have no problems with.

before her was the new greg dilulli band, the afghan whigs guy. i forgot how much i liked him. all that fake drama. but he sings good and the music is strong.

after the muffs the circle jerks played but first there was the inbetween music that a dj spun as the roadies set up the drums and junk. they played a smiths song. i thought of you. i wish i knew the title, but i don’t know any of their titles.

they also played teenage fanclub, who i hope you listen to.

i left about halfway through the circle jerks. they were damaging my eardrums. at first it was in a good way, and i must say, they blew everyone away. they not only still have it, but it felt like they gained even more anger and spirit and attitude over the years.

punk chicks got in there and elbowed and it was sweet. young mexicans dressed for the occasion got in there. but the fat head skin heads appeared like it was yesteryear and they were drunk or stoned with that sleepy look in their eyes that said hit me i don’t care i wont feel it ive been hit all my life.

and someone hit me and i took a picture cuz ive been in pits fuckhead.

best one i was in was public image at the ventura theatre and johnny spit on us and insulted us and picked his nose and held it out to the grasping hands below and wouldn’t even give a snot to us, but he rocked us. in plaid.

depression leads to freedom. boredom can be a breakthrough, i type as i watch triple x and wait for the man.

on top is a picture of me and marc and jeff from my favorite band.