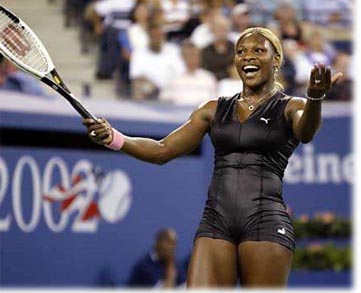 casual readers may not know that my website predates the busblog.

i have been updating my website since the summer of 2000 when i was unceremoniously fired from the dot com that i worked at, only to be ceremoniously rehired 4 hours later due to popular demand. it’s true that a week or two later i celebrated the williams sisters win at wimbledon which was the first time serena (pictured, right) made it on this server, but a week before all that i put up my first story, an AP reprint, about a girl named Anna. color me loyal.

now today was a pretty good day, financially, i made $187 from selling a pair of $65 chris isaac tickets thanks to eBay. the profits i put in the thermometer. at almost the same time my man steve w. from canada was flowing the busblog $51! which is the largest single donation to date and deserves a round of applause. merci steve! that brings our total to $625, and i know we only have a few days left in the month, but im starting to think we can reach this bizarre goal.

but then, im a cub fan. i dont do much thinkin.

it was also a good day because my buds matt and ken double teamed me with two powerful links to my lil thing about Instapundit.

and then i got bukkaked with the Oish love. and no offense to my bros, but there arent any better hits than 18 yr old southern cal cam girl hits cuz tick tock they dont stop — plus Oish (pictured, below) linked me to every single one of her new pics! nice scamola if you can get it.

around 7pm chris called me. she was bored in santa monica and wanted to take me to the movies. she picked me up, we went over to the ridiculously overpriced Arclight Theatres because theyre still showing every movie that came out this summer, theyre terribly convienent, everyone there is SOOOOO nice (order a popcorn and the guy says, “so what movie are you guys here to see tonight? Bourne Identity, yeah, that one is great.”), free parking, and because tickets are $14 each the theatres are basically empty.

our ushers came out before the previews to introduce themselves, then we were very nicely entertained by Matt Damon and Famke from Run Lola Run in Bourne Identity. dude who directed Go directed this one and it was really great.

took a leak in the new bathrooms of the Archlight and saw that some kid had tagged the stall and stuck an Obey sticker on the handle of the john. love the kids.

hollywood compared to her plush wesssssside Pavillions. crazy thing is, they’re both owned by Vons, so the same apple tree produced her $1 apple as my fifty cent apple.

chris is the best ex. we held hands in the movie. she pushed my cart at the store. even paid for a bunch of stuff. have i told you shes lost 20 pounds? looks better than ever, which, i know, sounds impossible, but its snot. sometimes i forget that she even lives just an hour away i get so caught up in the menusha of my daily life. i have to remember not to overlook her, cuz shes the best.

in honor of the Instaman’s birthday, heres a few more links for your ass:

raymi shows us a webpage of a happy couple that are so happy that it reminds me why im not looking to hard for my soulmate.

mr. know it all sends us over to joe rogan’s site where he met up with a great big fat nude elvis singing, dancing and peeing at Goldfingers last month. i need to get out more.

and lastly, send your true love some Pee Mail, they’ll either think it’s truly adorable and love you, you twisted fuck, or they’ll just scoff and say, “see? see!”