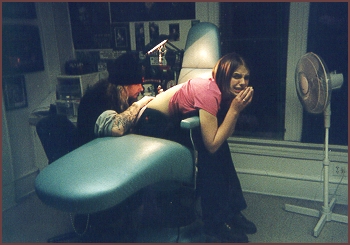 or hacker or some shit creeped into the busblog box on friday and fucked up the program.

i had left my kazaa on and i was sharing with the world as we should all do and some non-angel came into my shit and poked around and left behind a calling card and my computer went boom.

right now im at a local internet cafe here in east hollywood. it’s warm. it’s almost hot. my buddy jeff from tsar is working his magic on my computer which is a few years old and never had any problems like this before.

jeff is such a good guy he even drove over to my place yesterday to pick it up and he had an extra copy of XP on his person and suggested that we start all fresh and new and i said ok.

the new tsar cd is on its way, he says.

chris came over last night and we had thai and watched “it happened one night” and she gave me a super great makeout kiss because i did something really hard this week and i forgot that that was the promise that she agreed to.

she looks pretty fucking hot, too.

she had these red pants on with these zippers and lines the raced up the back of her legs and down the sides and back up the front.

i kept saying back up the front!

shes such a great friend, and you forget that sometimes when youre banging away at the computer all night and day.

i had two good magazines for her to go home with and that norah jones cd and a kiss on the cheek.

ive caught up on a lot of tv without a computer this weekend. one particular suprize was on Starz who was having a free weekend. i saw The New Guy which im glad i taped cuz it’s pretty damn funny and lots of good cameos and cheerleaders in plaid skirts and good music and nerds.

last night i had a dream that Blogging grew like professional skateboarding, and good bloggers could get sponsored by trendy companies and travel around and stay in Best Westerns and dorm rooms and do some housesitting, but basically traveling around the world meeting people and having cute girls sit on our laps.

not smoking has allowed my dreams to come back.

this afternoon i watched michael jordan against the knicks score 26 points in the first half.

then i went outside for a walk.

then wrote to you.

two things i would have never done with a working computer.

and all completed before 1:17pm on a sunday.

now i have the rest of the day to read my Bible.