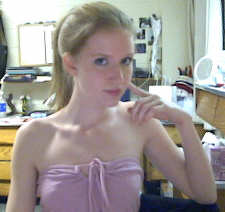 and took a super long nap this afternoon cuz my body is getting really old. so here it is now 4am and im up. hi!

at 3am i was up too. and not feeling so swell. who was i chatting with? someone. see, the memory is old too.

oh that’s right, i was chatting with ashley’s friend, jenny. she’s in london and was telling me that she is going to be going back to boston soon and shes a little nervous cuz schools gonna start and she doesnt have an apartment there yet and i said for her to have no fear since im pretty sure my man o-dub will loan her his couch if she needs a place to rest her weary head.

that seemed to soothe her.

but still i wasnt in the best of moods. and then i saw one of the goth twins was online and i asked her if she still hated me.

what happened was, i found her site, wrote about her and her twin sister, was really nice, saying how they were both super gorgeous and how the older one makes a really impressive site and has some cool things to say about stuff. and she put that on her site, but when her sister read it and saw that i have a link to subscribe to maxim and stuff that i must obviously be a sexist, etc. and convinced her sister to not talk with me any more!

so tonight i IMed her and asked if she still hated me.

she said id get over it.

but really, it does suck to be judged negatively so quickly. sexist? as if!

one reason i write about women so much is because i find them fascinating and superior.

it was good talking to her because she was telling me some pretty personal stuff, and i said, do you tell this stuff to everyone, are you that open normally? and she basically said, no, that she trusts me.

when i first started being friends with ashley, jenny didnt approve. i didnt blame her. she said something about being at a teen bar somewhere in europe and getting grossed out by these older guys who would hang out in there. eventually, though, i guess jenny saw that i wasnt some creepy dude, that i was just a regular weirdo, and alls good now.

but at 3am i was still bummed out even though she said nice things to me.

3am, i realized, was usually the hour that ashley would call me. i would be passed out, of course, at that evil hour, like most of america, but she was just getting her second wind, and alone and bored, and would ring me to say sweet things and keep tabs on me.

“and what exactly did you do?”

sometimes i would fall asleep and she would mash the buttons on the phone and id say, wha?

i flipped on my aol to see if moxie was around, she wasnt.

and i kept it on as i heated up some peas and opened the french doors to let the breeze come in.

and then i saw a little chat window open up from southern california’s most popular cam girl, Oish!

now Oish had written me a while ago and i wrote her back but never followed up because i didnt really think it was for real.

when she got me on the chat tonight i asked her how many hits she gets.

im pretty happy with the popularity of this blog, and it gets about 500 uniques a day. Oish writes about four paragraphs a day and gets ten times the hits.

moxie asked me yesterday why she gets more hits on the days that she posts less, and i told her that maybe all her guy readers are saying that they prefer a woman who dont talk so damn much.

maybe i am a sexist.

its also nice to discover that our girl Oish is a fan of the busblog and she wanted to say hi.

she said she’d call me on the phone, but her battery was dead.

my phone number, ladies, is ridiculously easy to remember.

you could probably even guess it.

apparently the daisy princess has forgotten it.

anyway, near the end of the chat she said that she really liked my blog!

Oish: I admrie that. I get so sick of boring ‘blogs’ ugh. and you keep yours interesting and intelligent but not so that it makes your audience feel inferior.